A code of conduct to protect online free speech and privacy in restrictive countries was signed by major technology companies such as Google, Yahoo, and Microsoft. The involvement of these three power playing internet companies dates back to 2008, and they hoped that other companies would follow in their lead of a rallying moment for a core cause. Noticeably absent from the free speech pact are social media platforms such as Facebook and Twitter. All of the participating companies that signed the free speech pact are American companies; There is a void in the global initiative of advocating the protection of free speech. Although Facebook and Twitter are widely used by large audiences and activists in other countries in the Middle East and all over the world, they are not involved in this protection of free speech pact. Because free speech laws and the First Amendment only applies to the United States and are not global laws, there is a controversy on whether or not companies who have signed the free speech pact (Google, Yahoo, and Microsoft) have the adequate power and policies to even address the privacy and free speech issues. It is up to independent auditors to examine and interpret whether or not the companies adhere to government demands for user information and to decide whether they store users’ data in countries where free speech is protected. Susan Morgan, the executive director of the Global Network initiative, said that, “Recent events really show that the issues of freedom of expression and privacy are relevant to companies across the board in the technology sector, things really seem to be accelerating.” Facebook and Twitter have made a positive impact on freedom by highlighting the crucial role technology can play in the world’s most closed societies, which leaders of the initiative say makes their efforts even more important.

The code of conduct states that companies must try “to avoid or minimize the impact of government restrictions on freedom of expression” and protect user privacy when demands by government “compromise privacy in a manner inconsistent with internationally recognized laws and standards.” Although it sounds like companies must hold fast to these requirements, there is some wiggle room. Companies that abide by a country’s censorship requirements are able to remain in compliance with the code of conduct as long as they disclose it. The main idea of the free speech pact was to include as many internet companies as possible in order to create a greater influence and have more credibility. The companies who decided to refrain from signing the code of conduct have done so for reasons such as fearing the auditing process and not seeing any financial benefit from doing so.

A spokesman for Facebook, Andrew Noyes, did not comment directly on the topic of the free speech pact but says that, “As Facebook grows, we’ll continue to expand our outreach and participation, but it’s important to remember that our global operations are still small, with offices in only a handful of countries.” Social media sites such as Facebook and Twitter have had a huge affect on freedom of speech around the world, but the issues of privacy and free speech are still not black and white, especially when it comes to crossing country borders.

In order to be more influential, more companies will have to be added to the free speech pact. The initiative is modeled on previous voluntary efforts aimed at self-regulation and this one is no different as it came to life at a time when Internet companies were seeking to polish their image and potentially ward off legislation. The idea of the pact is to help companies do the right thing instead of having to play catch up after they mess up.

The Internet provides a forum for various outputs of information and communication services. In America, we take advantage of all the services that free speech can offer us. Despite what people assume, the internet is regulated and American citizens are not completely oblivious to the dangers that then internet creates. By signing the code of conduct, countries will be able to learn how to work collectively and to allow them to integrate and communicate freely with those outside of their countries. The key for this code of conduct to protect privacy and free speech is to get technological companies outside of the U.S. to sign it. If Facebook and Twitter were to sign the pact, the benefits of free speech would be easier to spread because of the audiences that the social networking sites attract. 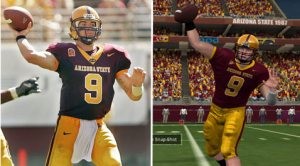 The argument about whether college students athletes should be paid is long standing, and fierce debates have been going on from both sides for decades. However, in the case of Sam Keller v. Electronic Arts and the National Collegiate Athletic Association, there is a relatively new issue at hand — and it may have implications far beyond athletics.

The class action lawsuit was first filed in May of 2009 in U.S. District Court in San Francisco. Keller, a former quarterback for the Arizona State Sun Devils and the Nebraska Cornhuskers, sued Electronic Arts, a video game company, the Collegiate Licensing Company and the NCAA over the use of players likenesses in its video games. Keller claims that Electronic Arts knowingly uses the likeness of former and current collegiate athletes to increase profits.

Student athletes are not paid, they are given scholarships to attend schools which cover room and board as well as tuition costs and university fees. Depending on the type of scholarship, textbook costs may be covered as well. They are prohibited from participating in any commercial activity.

The district court ruled that Keller and other former college players were owed by Electronic Arts for being used in the video game series of NCAA Football.

Electronic Arts filed an appeal, in the 9th Circuit Court of Appeals, where the case is sitting at currently and many expect it will indeed reach the Supreme Court.

Electronic Arts defense in this case is that its games are creative works of art, and using a players likeness in this case is protected under the First Amendment. They never actually name the players in the games, instead opting for generic names like “QB #10” or “WR #88,” referring to the players position and jersey number. However, Keller’s side argues that these games are not creative, they are intended to be realistic representations of the real life sport and have no true “creative” imaginative side to them. Looking at the picture above, courtesy of the Los Angeles Times, it’s clear this was intended to be a realistic representation of Keller. The image on the right, Keller in NCAA Football 07, mimics what Keller looks like in real life to the left, down to the wrist bands on the arms.

District Court Judge Claudia Wilken sided with Keller on this issue. She said that the game did not do enough to “transform” the images of the players to qualify for First Amendment protection.

Keller asserts that while his name may not have been used in the video games, his likeness certainly was. His height, weight, age, position, jersey number and hometown were all accurately depicted, the only thing stopping it from fully representing Keller was that there was a “QB #9” on the back of his jersey in the game rather than his real last name. Keller also argues that in recent years, with new technology, Electronic Arts has been skirting the no-name issue by allowing a feature in their game called the “EA Locker.” This allows those who purchase of the video game to re-name and create rosters and upload them for anyone who has the game to download. In mere seconds, a person sitting down to play the game could have every college athletes name in the game.
Another issue that Keller brings up to prove the first point is about the audio commentary in these games. Just like in real life, there are play-by-play announcers and color commentators who provide a backdrop into what is going on during the game. In the NCAA football video games, the commentators will announce a player as their jersey number rather than their name. However, if anyone edited a players name to their real life counterpart, or downloaded a roster from the “EA Locker” feature, the announcers would say that players last name instead. Keller argues that Electronic Arts knowingly had their announcers read off last names of players in the recording studio, so that when edited, their names would be announced in the game. Keller says this feature is also adding to the realism, which in turn is helping in sales of the game. Not every player has his name recorded, but rather star players and those with common last names.

If the Court ultimately rules in favor of Keller, this would be a severe blow to Electronic Arts. They would either have to stop producing their annual college sports games, which have sales numbers in the millions, or continue producing them but be forced to use very generic players which would result in a major sales decrease. This is how Keller would prove that his and others likenesses are beneficial financially for Electronic Arts.

As mentioned earlier, there are implications in this legal battle that stretch beyond games and sports. Major corporations and organizations are taking sides on this issue, as many foresee this issue going all the way to the Supreme Court. The Motion Picture Association of America, ESPN, Viacom, Gannet publishers and Hollywood Studios are just some of the companies who are backing Electronic Arts in this case. These organizations argue that this will severely stifle artistic expression, and use examples with movies such as “Forrest Gump,” which uses celebrity images. They argue that under the First Amendment, they have the right, for creative purposes, to use the images of public figures.

The Screen Actors Guild, A.F.L.-C.I.O, the unions of Major League Baseball, the National Hockey League, and the National Football League, the American Federation of Television and Radio Artists and other athletes are backing Keller, claiming they have a right to control their public image they worked hard to create.

A previous case dealing with image likeness in the same Court of Appeals was WHITE v. SAMSUNG ELECTRONICS AMERICA, INC, 989 F.2d 1512 (1993). The 9th District Court of Appeals ruled in favor of the plaintiff, Vanna White from Wheel of Fortune, who sued Samsung over an ad that featured a robot wearing a wig and a gown who turned letters over on a board resembling that used in Wheel of Fortune. The court stated that if viewed individually, there was no real harm, but if viewed collectively, there was little doubt that it was Vanna White that was being portrayed in the ad.

Another case, this one more closely connected to the Keller case, was BROWN v. ELECTRONIC ARTS, INC, 722 F.Supp.2d 1148 (2010). James “Jim” Brown, a Hall of Fame running back in the NFL that played on the Cleveland Browns, sued Electronic Arts over using his image and likeness in their Madden football video game series. They again, in this instance, used retired players like Brown as part of a “throwback” selection of teams to choose among. Browns career statistics and likeness were used, and just like in the NCAA games, his last name was not used.

Ultimately, I think the district court ruling will be upheld in the appellate courts hearing. This would then propel the case to the Supreme Court, who, due to the extenuating circumstances surrounding the case and all of the far reaching implications it has, would have to hear the case. In the end, whatever the Supreme Court decides will be a landmark decision in this ongoing legal battle, and it will have an affect on all forms of media.
*Image courtesy of the Los Angeles Times