In 2010, a fifth grader in Pennsylvania attempted to pass out invitations to a church event in the Poconos to her classmates. Her teacher stopped her, saying she needed permission from the principal, who then said she needed permission from the superintendent. The superintendent refused the request. Backed by the Alliance Defense Fund (ADF), a conservative Christian legal group, the family of the girl, identified as K.A., sued the Pocono Mountain School District for infringing on the her freedom of speech.

The original court ruled in the girl’s favor, so the school district appealed, claiming their decision wasn’t motivated by the fact that the girl’s flyers were religious, but rather due to a policy of the district to not allow civic organizations or special interests groups to hand out materials that promoted their interests over the students. They also cited safety concerns and concern that parents would think the event was school-sanctioned. During the trial, the school district revised the policy to state that students and staff were prohibited from passing out any materials during the school day that did not relate directly to or contributing to school district related activates. They also added another policy which allowed students to pass out invitations to social events with permission from the superintendent.

The case went to Third U.S. Circuit Court of Appeals, where the panel of three judges upheld the lower court’s decision. The Court’s decision was made largely from the basis of the 1969 case Tinker v. Des Moines (Tinker v. Des Moines Independent Community School District, 393 U.S. 503). In this case, students were prohibited from wearing black armbands protesting the Vietnam War because the school district claimed they would disrupt the other students. However, the judge ruled the school could not have known what the students wearing the armbands would have done, and in fact, they had very little impact on the school. This created the Tinker Standard, which allows students to still have freedom of expression in schools so long as it doesn’t disrupt their fellow students.

The 3rd Circuit also pointed out that the school could not restrict a student’s expression of handing out the flyers because it did not cause a “substantial disruption”. The Superintendent had made no effort to see if the church posed a safety threat or if parents would have thought the event was school sanctioned. The court also cited the fact that other outside organizations had sent home flyers with children in the past and children had passed out invitations to birthday parties and that the fact that the invitation came from a church should not have changed the approach the school took to handing out material.

The difference between Tinker, Saxe and K.A. is that the latter two dealt with high school students. K.A.’s case raises the issue of how Tinker should apply in younger children, specifically elementary school students. In 2003, the Third Circuit Court ruled on a case, in which they stated “in the elementary school setting, age and context are key”. The case, Walz v. Egg Harbor Township Board of Education, involved a preschooler, Daniel Walz, who handed out pencils with a religious message on them to classmates during a holiday party and later distributed candy canes with a religious story attached (Walz v. Egg Harbor Township Board Of Education. 342 F3d 271).

In this case, the Court said whether or not the expression was appropriate depended on “the type of speech, the age of the locutor and audience, the school’s control over the activity in which the expression occurs, and whether the school solicits individual views from students during the activity”. The Court also decided that younger children in elementary school, specifically those in preschool and kindergarten could had more controlled exercised over their speech and expression because they require more guidance than older children.

However, in Walz, it was decided that Daniel Walz’s mother was the guiding factor behind the pencils therefore Daniel’s freedom of expression had not been intruded upon. It was also ruled that the school district had made it clear that no gifts with religious, commercial or political undertones could be exchanged and the pencils had a clear religious message along with intent to spread that message.

In K.A., the Court reiterates their point that younger children require more guidance and therefore more control, but hesitate applying it directly to the case. Although K.A. was technically still an elementary school student, she was older than Walz and by the Court’s reasoning should have still been allowed more rights than Walz. The Court did maintain that regardless of the age of the child, they saw no reason the “substantial disruption test” from Tinker couldn’t be used in an elementary school setting.

It is clear from K.A. that the issue of freedom of speech and expression for younger students is still being debated. The Third Circuit Court is hesitant to determine at exactly what age school children gain what rights and seem to most likely be waiting for a ruling to be made by the Supreme Court before making any definite judgments for themselves. Instead, cases like K.A. are decided on a case by case basis and in K.A. it was decided that the school district didn’t have enough evidence that the flyers would cause a substantial disruption to stop K.A. from distributing them. 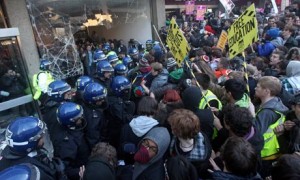 In June of 2012, a Traditional Values student group in Ohio was told by police they could not hold up their signs and had to place them face down. This act violated the groups First Amendment rights to express their opinion.

According to this article from WND, the Thomas More Society helped bring about a federal lawsuit against Sinclair Community College in Dayton, Ohio. WND also reported that Bryan Kemper, a speaker at the event, had witnessed this all unfold.

“The police walked around the crowd telling people to put their signs down, that they could not hold them in their hands,” said Kemper.

The police’s reasoning for requiring the protesters to put down their signs was because another group complained that the signs had been disruptive. However the school had no policy that did not allow the students to hold up their signs. According to the report filed by the Thomas More Society “it is a fundamental First Amendment law that the content of free speech, no matter how ‘offensive’ it may be to certain onlookers, deserves the very highest degree of legal protection.”

Where and how students protest on college campuses throughout the country has long been the subject of First Amendment challenges. Since the Vietnam War, campus police and their government authorities have attempted to silence protests. A more notable example is the shootings that happened at Kent State. Students protested the expansion of the Vietnam War and unexpectedly faced gunfire by the National Guardsmen. The shooting ended with four dead and nine others wounded.

In Clayton Smith v. Tarrant County College District, the school banned their students from wearing empty holsters on their belts as protest (Case 4:09-cv-00658-Y). The group running the protest, Students for Concealed Carry on Campus, was seeking to have state and college authorities, allow students who are licensed, to carry a concealed firearm on campus.

Smith had told the school they would be holding this protest throughout campus and was told he could not pass out pamphlets. They also told him he could not talk outside of the ‘Free speech zone’. He canceled the event.

Later in 2009, the group attempted another protest and the school again turned down Smith and said that their policy had changed. Following, Smith filed a lawsuit under 42 U.S.C. § 1983 on November 3, 2009. In the end the school was found to be denying first amendment rights by designating free speech zones and keeping out areas that are normally considered public forums. However the court found that classrooms are subject to more regulation than other areas.

Peter Breen, executive director and legal counsel of the Thomas More Society, was quoted by WND saying, “Freedom of expression is an absolutely fundamental value in a democratic, self-governing society and indispensable to the educational process.” 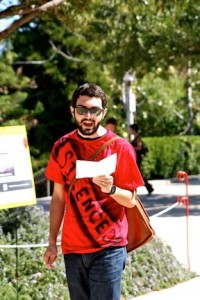 Over the past years the Palestinian-Israeli conflict has consistently been reported in the American media. In 2009, Israel invaded Gaza in “Operation Cast Lead,” leaving over 1,400 Palestinians dead (Btselem Dec. 27, 2009.) When students at the University of California Irvine campus found out that the Israeli Ambassador to the U.S., Michael Oren was going to give a speech at their University, they planned to protest his speech. On Feb. 8, 2010, 11 students stood up and one by one, at different times they confronted Oren with remarks such as “Michael Oren, propagating murder is not free speech,” and “It is a shame that this University has sponsored a mass murderer like yourself.” All 11 of them were arrested right after they protested and were released after three hours. Out of the 11 students, 10 were found guilty by the Orange County Superior Courthouse of violating:

Three of the students were from UC’s Riverside campus. Dan Stromer, a lead attorney of the defendants stated that this misdemeanor law in California criminalized forms of political speech that are protected in the U.S. constitution(SouthernCalifornia Public Radio, “Irvine 11attorneys file appeal,” Oct. 19, 2011.) In their appeal the defense attorneys’ stated that the students were convicted on the basis of an unconstitutionally vague state law prohibiting the willful disturbance of meetings (Daily Pilot, “Muslim students appeal conviction,” Jan. 23, 2013.) This case also started a debate of whether the students’ or Oren’s free speech rights were violated, and also if the district attorney’s office should have filed criminal charges in the first place. (DailyPilot, “Muslim Students Appeal Conviction,”Jan. 23, 2013.) One of the 10 students, Osama Shabaik, stated that the group wanted to host a University of Chicago style protest (Uprising Radio, Two Irvine 11 Students Share Their Story, Sept. 29, 2011.) Earlier in 2009 when the former Israeli Prime Minister Ehud Olmert spoke at the University of Chicago over 30 attendees including students and community residents disrupted his speech (ABC 7 News, “Groups Protest Former Israeli PM’s speech,” Oct. 16, 2009.) However, none of these students or community members were arrested or charged with misdemeanors. In the “Irvine 11” case one of the students was dropped from all charges due to the DA’s inability to bring charges against him. He agreed to complete 40 hours of community service and accepted a plea bargain (Orange County Register, “Case Dismissed Against Muslim Student,” Oct. 7, 2011.) Reem Salahi one of the defendant’s lawyers stated, “These types of protests happen all the time. It is actually very rare, completely uncommon for individuals to be prosecuted under Penal Code 403. That’s exactly what happened in this case”(University of Southern California, “Irvine 11 Attorney Reem Salahi Speaks On Implications Of The Case Oct. 5, 2011.) She also stated that she believed that it was more of a case against the content of what they said versus conduct. The Muslim Students Union was suspended after the protest. Since the Irvine 11 included several board members of the organization the prosecutors used a subpoena and gained access to the student’s emails in which they later used as evidence to prosecute the students for conspiracy to disrupt a meeting (Orange County District Attorney Press Release, Sep, 23, 2011.) Since all of the 10 students have clean records the judge sentenced them to three years of informal probation, 56 hours of community service and a $270 fine for each to pay. As of now all of them are no longer on probation and their defense attorney’s have appealed the guilty verdict.