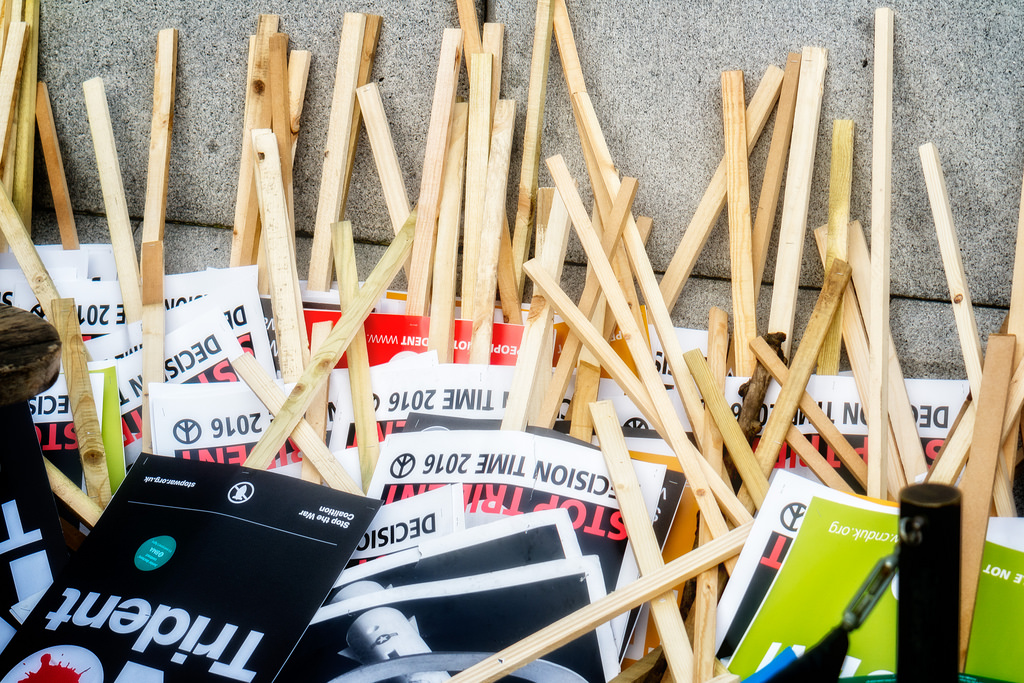 By Delia Franchi and Taylor Calta

Citizens of the United States have to abide by many laws. However, when it comes to expressing one’s viewpoints, there is a constitutional amendment that protects the people. The First Amendment to the United States Constitution provides that no law may restrict the freedom of speech. With the 2016 Presidential election fast-approaching there will be signs expressing the views on which candidate should win the election. Many towns and local municipalities regulate signage, which raises an important question. What restrictions on signs in the public space, if any, violate the First Amendment?

The United States Supreme Court case City of Ladue v. Gilleo, 512 U.S. 43 (1994), brought about a controversial twist to the public when it comes to signs expressing one’s views. In that case, Margaret P. Gilleo, a resident of Missouri, placed a sign in her front yard expressing her opposition to the war in the Persian Gulf.  While a sign expressing a political point of view may be considered the quintessential form of freedom of speech, it was removed because of a City of Ladue ordinance. After the disappearance of Gilleo’s two signs that she had placed on her lawn, she filed a complaint with police. The police informed her that her signs were prohibited due to a city ordinance. The U.S. Supreme Court ultimately decided the city’s ordinance was unconstitutional and in violation of Gilleo’s right to free of speech under the First Amendment.

Before the Supreme Court, the city argued that its total ban on residential signs except for those that fell within one of ten exemptions did not violate Gilleo’s First Amendment right to free speech. The Supreme Court upheld the lower courts holding that the City of Ladue’s ban on residential signs was in violation of Margaret Gilleo’s First Amendment right to free speech (Ladue).

The ruling supported the Supreme Court’s belief that a city cannot place limits on the free speech rights of residents unless there is a compelling reason. In this case, the city’s desire to decrease clutter in residential areas was an insufficient reason to justify a ban on signage, such as Gilleo’s signs expressing her opposition to the Persian Gulf War (Ladue). As a result, Gilleo’s placement of the signs on her lawn was protected.

The City of Ladue v. Gilleo case acknowledged the U.S. Supreme Court’s devotion to strict scrutiny of governmental attempts to restrict free speech rights. The case also established a guide for future cases where the balance between state regulation of signage and individual rights of expression may conflict (Ladue).

Recently, in Reed v. Town of Gilbert, 576 U.S. (2015), the United States Supreme Court considered whether content-based restrictions on signage violated the First Amendment. In 2005 the town of Gilbert, Arizona adopted a sign code that restricted the size, number, location, and duration of certain signs. Clyde Reed, the pastor of Good News Community Church,  placed 15 to 20 temporary signs in various locations in the town. The sign code compliance manager cited the church for exceeding time limits when displaying signs and for failing to include the date of the event on the sign (Reed et al. v. Town of Gilbert, Arizona).

With religious content seeming like the only reason for the restrictions, Reed and the church filed suit in the United States District Court for the District of Arizona in March, 2008. The church claimed that the sign code violated their freedom of speech under the First Amendment. The District Court granted summary judgment in favor of the town. The United States Court of Appeals for the Ninth Circuit affirmed that ruling, holding that the town ordinance was a content neutral restriction on speech and did not violate the First Amendment. The church then appealed to the Supreme Court of the United States (Reed v. Town of Gilbert, 707 F.3d 1057, 2013 U.S. App. LEXIS 2715 9th Cir. Ariz., 2013).

On June 18th, 2015 the Supreme Court reversed the Ninth Circuit and held that “a town ordinance that places different limits on political, ideological and directional signs violates the First Amendment” (Liptak). Justice Clarence Thomas held that Gilbert’s Sign Code restrictions did not survive strict scrutiny because the ordinance was not tailored to further a compelling government interest.

At the start of this article the question was posed whether restrictions on signs in the public violate the First Amendment. Any restrictions by municipalities must be content neutral, narrowly tailored, and be for a compelling government reason. It will be interesting to see how municipalities with signage restrictions meet that legal criteria.