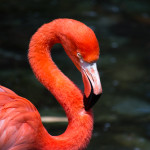 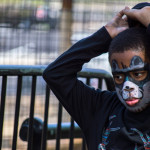 Children by Shauna Bannan. A child follows his guardians looking tired and uninterested. Like many of the children at the zoo on April 28, this boy had his face painted as an animal. 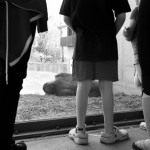 Editorial by Casey Kallen. The zoo was once a place I remembered from my childhood as educational, fun, and filled with beautiful creatures. As I get older I realize that the zoo is not the place that lives in my memories. Instead, these memories are replaces with those of sadness and deprivation of one of life’s basic necessities; freedom. 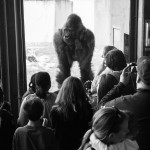 Idea of a Zoo by Yu Du (Freya). A Gorilla suddenly jumps onto the box near the glass attracting many people around him. 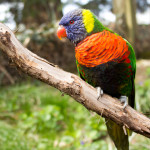 Birds by George Holevas. A Rainbow Lorikeets perches on a branch in the Lorikeet Encounter exhibit. 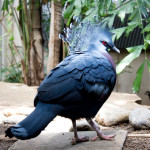 Bad Hair Day by George Holevas. A Queen Victoria Pigeon basks in the sun shining through the bird house. 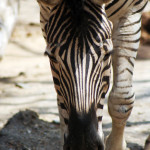 Bad Hair Day by Anna Ryan. Two Spectacled Langurs cuddle up with each other occasional closing their eyes at the Philadelphia Zoo on April 25, 2014. They are known for looking lazy, but they are really just digesting their food. 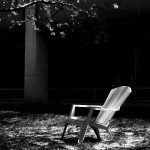 Spring by Tabitha Smith. On a beautiful spring day of April 22, 2014 a lone chair rests empty in front of Barton Hall, waiting for students to enjoy the sun, as everyone flocks to the Bell Tower. 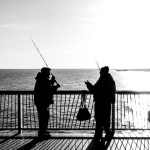 Expression by Dan White. Two fisherman engage in conversation while waiting for fish to bite on a slow day at Coney Island Pier, New York on April 21, 2014. 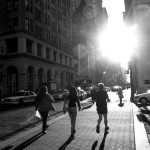 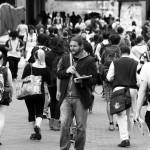 Lost by Anna Ryan. A student stands in the middle of a sea of students walking to their classes at Temple University in an effort to stop them and talk about “going green” on April 22, 2014. 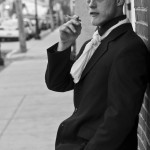 Attitude by Brittany Salerno. Travis Hadfield, 23, shows a cocky attitude as he smokes a cigarette prior to opening night of A Tall Tale Heart. Hadfield stars as Edgar Alan Poe at Chaplin’s Music Café in Spring City on March 19, 2014. 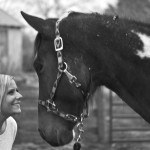 Expression by Brittany Salerno. Samantha Calvanese, 25, expresses her compassion towards a horse that she cares for in Boyertown on March 19, 2014. 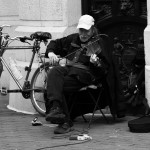 Expression by Yu Du (Freya). The man plays the violin at city hall on April 21, 2014. He smiled when he found that someone was photographing him. 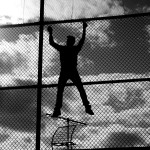 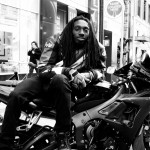 Attitude by Dan White. “I love to go fast, I’ve gotten my bike to go 145mph before. It’s fun,” said this motorcyclist as he keeps cool on Walnut Street in Philadelphia, PA on April 24, 2014. 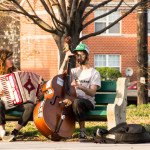 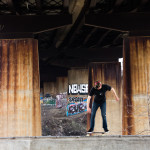 Skateboarder by Dan White. A skater grinding along a quarter pipe at the Grays Ferry Skatepark in Philadelphia, PA April 13, 2014. 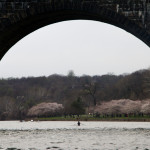 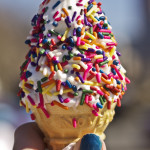 Bonus by Brittany Salerno. A vanilla ice cream cone with rainbow jimmies is enjoyed on the steps of the Philadelphia Museum of Art on a Sunday afternoon. 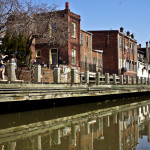 On Reflection by Brittany Salerno. Businesses along Main Street are reflected in the Manayunk Canal on Mark 12, 2014. 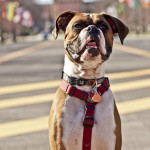 Animal by Brittany Salerno. “Luke the Boxer” sits at a traffic light on the Benjamin Franklin Parkway. 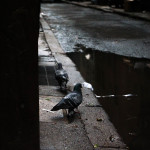 Animal by Tabitha Smith. Two pigeons saunter up a dark alley on 16th street between Sansom and Chestnut streets on April 14, 2014. 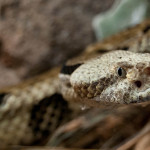 Not a Beach ball by Tabitha Smith. A Timber Rattlesnake slithers along the edge of his glass terrarium at the Philadelphia Zoo on April 11, 2014, before pausing to stare hypnotically back at viewers. 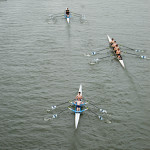 Physical Outdoors by Tabitha Smith. Three sets of rowers glide down the Schuylkill river, leaving the photographer with the impression of water strides on April 11, 2014. 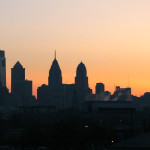 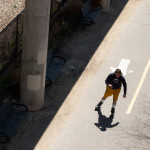 Movement by Alexis Ryan. A man roller blades on the runner’s path that runs alongside the Schuylkill River to then make his way uner the Market Street Bridge on April 16, 2014. 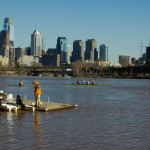 A River Runs Through It by Shelbie Pletz. Rowers enjoy the view of Philadelphia’s skyline as the make their way down the Schuylkill River on April 16. The river is about 135 miles long and lies entirely in the state of Pennsylvania, part of which flows through Philadelphia. 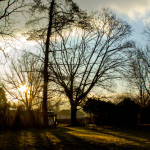 Bonus by Shelbie Pletz. An hour after the sunrise, the sun casts shadows across a residential backyard in Easton, Pennsylvania on April 13.