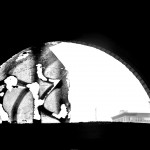 6:45am by Michael Wojcik, A broken semicircular window in the old Divine Lorraine Hotel on the corner of Ridge and Broad Street. What was once a lovely old fashioned style hotel, now joins the ranks of the numerous abandoned photogenic buildings in the Philadelphia area. 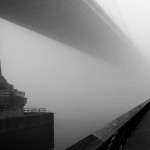 06:46 by Abigail Dienner. Joggers disappear into the fog as they make their way down the Race Street Pier beside the Benjamin Franklin Bridge. 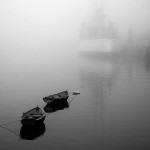 07:35 by Abigail Dienner. Two lonely boats drift farther away from the dock almost getting lost in the fog early Thursday morning. 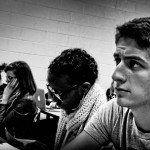 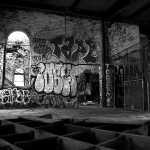 15:52 by Abigail Dienner. Katie Schmitt, an advertising student at Temple University, shoots film with her Yashica in Ortlieb’s abandoned brewery. 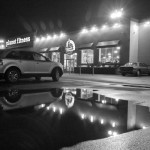 00:45 by Ian Guzzone. Catering to a newly body conscious Kensington, The Planet Fitness franchise on the corner of York and Aramingo remains open all night, eliminating any excuses.