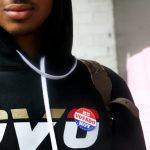 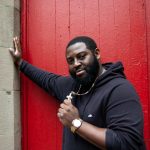 On the Campaign Trail by Zari Tarazona. Eric Rymer, 35, holds his cross outside of the Church of the Advocate on 18th and Diamond streets. Rymer handed out flyers at the polling place for his grandfather Milton Street, who was running for Pennsylvania’s 181st District in North Philadelphia on Tuesday, Nov. 6. 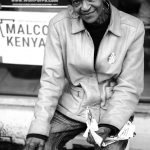 Voter Portrait by Jamie Cottrell. Carolyn Dixon, 66, of North Philadelphia smokes a cigarette outside of the A Level Inc. Salon on Germantown Avenue where she voted on Tuesday afternoon, Nov. 6. 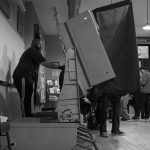 Inside a Polling Place by Wyatt Jianxuan Liu. Steve McFadden, a machine inspector, resets the machine and says, “thank you for voting and have a good day,” after each person casts their vote. At 11:51 a.m. he has done his more than 150 times at the Northern Liberties Neighbors Association in Philadelphia on Tuesday, Nov. 6, 2018. 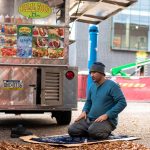 Freedom of Religion by Jamie Cottrell. Obaid Ullah, 34, steps out of his Hallal cart on the corner of Norris and 13th Street to pray on Wednesday afternoon, Nov. 7. 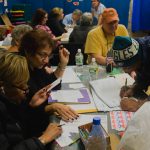 Inside a Polling Place by Valerie McIntyre. Volunteers help assist voters at the Francis Scott Key School located in South Philadelphia on Nov. 6, 2018. 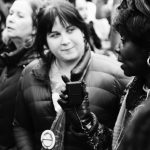 Freedom of Speech by Dylan Lyons. An advocate for Governor Tom Wolf gives a last minute pitch to her constituents at a polling location in Center City Philadelphia on Tuesday, Nov. 6, 2018. 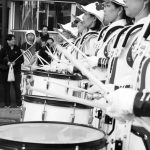